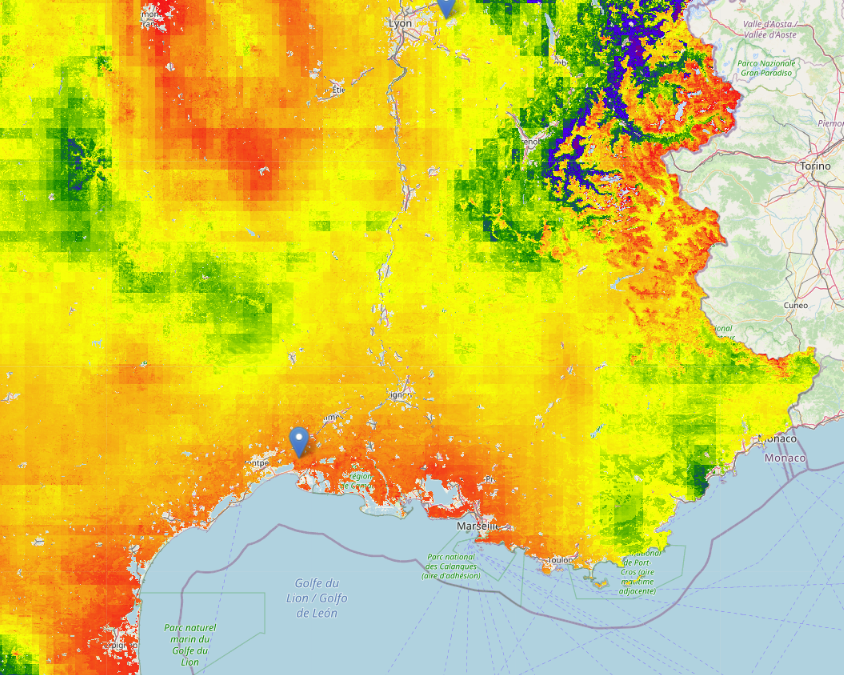 This article is an Earth Engine community tutorial.

Groundwater recharge represents the amount of water coming from precipitation reaching the groundwater table. Its determination helps to better understand the available/renewable groundwater in watersheds and the shape of groundwater flow systems.

One of the simplest methods to estimate groundwater recharge is the Thornthwaite-Mather procedure (Steenhuis and Van Der Molen, 1986). This procedure was published by Thornthwaite and Mather (1955, 1957). The idea of this procedure is to calculate the water balance in the root zone of the soil where water can be (1) evaporated into the atmosphere under the effect of heat, (2) transpired by vegetation, (3) stored by the soil, and eventually (4) infiltrated when stored water exceeds the field capacity.

This procedures relies on several parameters and variables described as follows:

Of course groundwater recharge can be influenced by many other factors such as the slope of the terrain, the snow cover, the variability of the crop/land cover and the irrigation. In the following these aspects are not taken into account.

In the first part of the tutorial, the Earth Engine python API will be initialized, some useful libraries will be imported, and the location/period of interest will be defined.

In the second part, OpenLandMap datasets related to soil properties will be explored. The wilting point and field capacity of the soil will be calculated by applying some mathematical expressions to multiple images.

In the third part, evapotranspiration and precipitation datasets will be imported. A function will be defined to resample the time resolution of an ee.ImageCollection and to homogenize time index of both datasets. Both datasets will then be combined into one.

In the fourth and final part, the Thornthwaite-Mather(TM) procedure will be implemented by iterating over the meteorological ee.ImageCollection. Finally, a comparison between groundwater recharge in two places will be described and the resulting mean annual groundwater recharge will be displayed over France.

First of all, run the following cell to initialize the API. The output will contain instructions on how to grant this notebook access to Earth Engine using your account.

Import other libraries/modules used in this notebook.

We additionally define some parameters used to evaluate the results of our implementation. Particularly:

From soil texture to hydraulic properties

Two hydraulic properties of soil are commonly used in the TM procedure:

Some equations given by Saxton & Rawls (2006) are used to link both parameters to the texture of the soil. The calculation of water content at wilting point \theta_{WP} can be done as follows:

We now define a function to get the ee.Image associated to the parameter we are interested in (e.g. sand, clay, organic carbon content, etc.).

We apply this function to import soil properties:

To illustrate the result, we define a new method for handing Earth Engine tiles and using it to display the clay content of the soil at a given reference depth, to a Leaflet map. 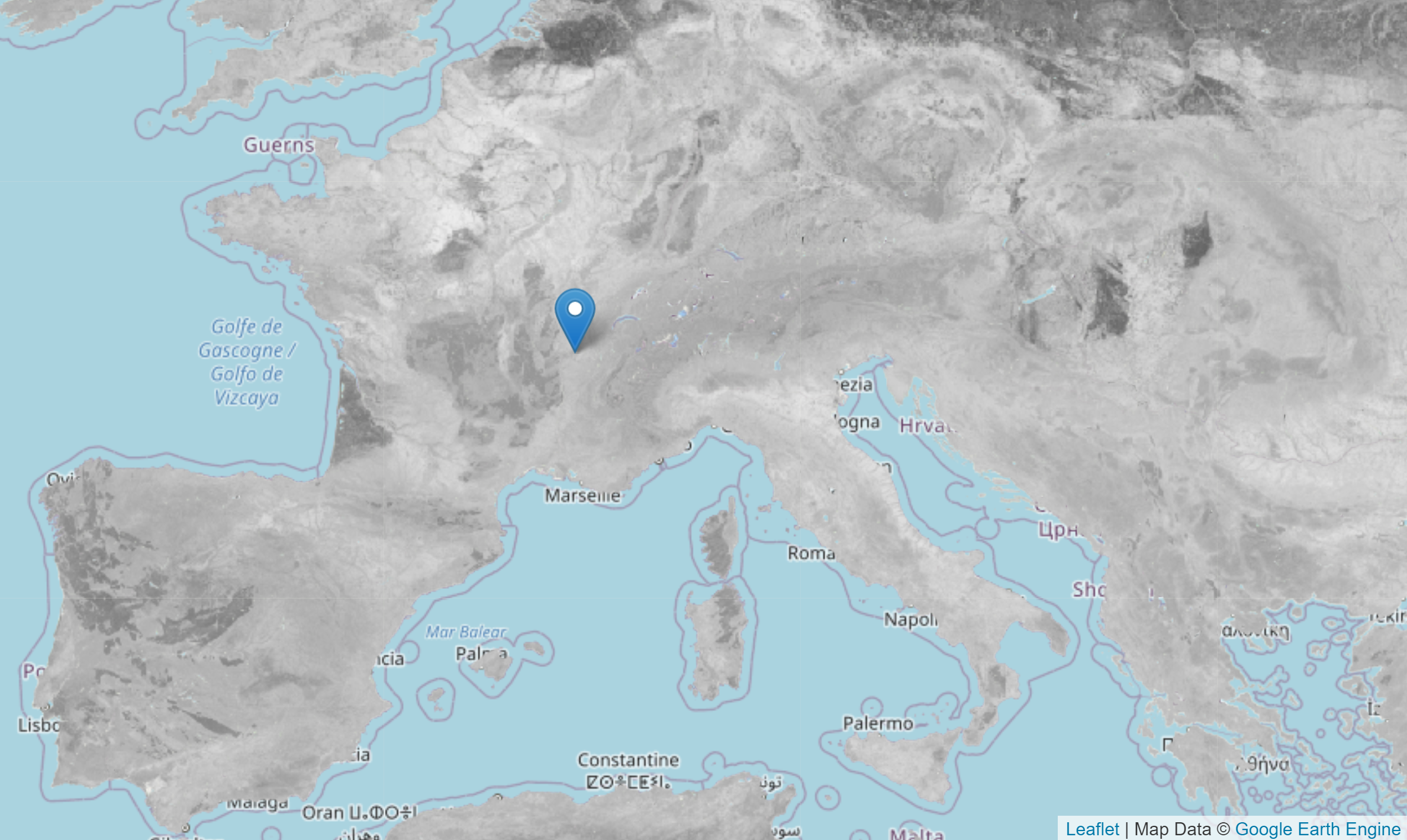 Now, a function is defined to get soil properties at a given location. The following function returns a dictionary indicating the value of the parameter of interest for each standard depth (in centimeter). This function uses the ee.Image.sample method to evaluate the ee.Image properties on the region of interest. The result is then transferred client-side using the ee.Image.getInfo method.

In the example below, we are asking for the sand content.

We now apply the function to plot the profile of the soil regarding sand and clay and organic carbon content at the location of interest:

Now that soil properties are described, the water content at the field capacity and at the wilting point can be calculated according to the equation defined at the beginning of this section. Please note that in the equation of Saxton & Rawls (2006), the wilting point and field capacity are calculated using the Organic Matter content (OM) and not the Organic Carbon content (OC). In the following, we convert OC into OM using the corrective factor known as the Van Bemmelen factor:

Several operators are available to perform basic mathematical operations on image bands: add(), subtract(), multiply() and divide(). Here, we multiply the organic content by the Van Bemmelen factor. It is done using the ee.Image.multiply method on the organic carbon content ee.Image.

When the mathematical operation to apply to the ee.Image becomes too complex, the ee.Image.expression is a good alternative. We use it in the following code block since the calculation of wilting point and field capacity relies on multiple parameters and images. This method takes two arguments:

The mathematical expression is applied as follows to determine wilting point and field capacity:

Let’s see the result around our location of interest:

The result is displayed using barplots as follows:

The meteorological data used in our implementation of the TM procedure relies on the following datasets:

We now establish a procedure to get meteorological data around a given location in form of a pandas.DataFrame:

We apply the function and see the head of the resulting pandas.DataFrame:

We do the same for potential evaporation:

Looking at both pandas.DataFrame shows the following points:

Both issues must be handled before implementing the iterative process: we want to work on a similar timeline with potential evapotranspiration and precipitation, and we want to avoid missing values.

Resampling the time resolution of an ee.ImageCollection

To address these issues (homogeneous time index and missing values), we make a sum resampling of both datasets by month. When PET cannot be calculated, the monthly averaged value is considered. The key steps and functions used to resample are described below:

The precipitation dataset is now resampled by month as follows:

For evapotranspiration, we have to be careful with the unit. The dataset gives us an 8-day sum and a scale factor of 10 is applied. Then, to get a homogeneous unit, we need to rescale by dividing by 8 and 10:

We evaluate the result on our location of interest:

Implementation of the TM procedure

Some additional definitions are needed to formalize the Thornthwaite-Mather procedure. The following definitions are given in accordance with Allen et al. (1998) (the document can be downloaded here):

The readily available water (RAW) is given by RAW = p \times TAW, where p is the average fraction of TAW that can be depleted from the root zone before moisture stress (ranging between 0 to 1). This quantity is also noted STFC which is the available water stored at field capacity in the root zone.

Ranges of maximum effective rooting depth Z_{r}, and soil water depletion fraction for no stress p, for common crops are given in the Table 22 of Allen et al. (1998). In addition, a global effective plant rooting depth dataset is provided by Yang et al. (2016) with a resolution of 0.5° by 0.5° (see the paper here and the dataset here).

According to this global dataset, the effective rooting depth around our region of interest (France) can reasonably assumed to Z_{r} = 0.5. Additionally, the parameter  is also assumed constant and equal to and p = 0.5 which is in line with common values described in Table 22 of Allen et al. (1998).

In the following, we also consider an averaged value between reference depths of the water content at wilting point and field capacity:

The Thornthwaite-Mather procedure used to estimate groundwater recharge is explicitly described by Steenhuis and Van der Molen (1985). This procedure uses monthly sums of potential evaporation, cumulative precipitation, and the moisture status of the soil which is calculated iteratively. The moisture status of the soils depends on the accumulated potential water loss (APWL). This parameter is calculated depending on whether the potential evaporation is greater than or less than the cumulative precipitation. The procedure reads as follow:

Case 2.1: the storage ST_{m} is higher than the water stored at the field capacity.

In addition, the water stored at the end of the month m becomes equal to STFC and APWL_{m} is set equal to zero.

Case 2.2: the storage ST_{m} is less than or equal to the water stored at the field capacity.

The initial time of the calculation is defined according to the first date of the meteorological collection:

Then, we initialize the calculation with an ee.Image where all bands associated to the hydric state of the soil are set equal to ee.Image(0), except for the initial storage which is considered to be equal to the water content at field capacity, meaning that ST_{0} = STFC.

We combine all these bands into one ee.Image adding new bands to the first using the ee.Image.addBands method:

We also initialize a list in which new images will be added after each iteration. We create this server-side list using the ee.List method.

The procedure is implemented by means of the ee.ImageCollection.iterate method, which applies a user-supplied function to each element of a collection. For each time step, groundwater recharge is calculated using the recharge_calculator considering the previous hydric state of the soil and current meteorological conditions.

Of course, considering the TM description, several cases must be distinguished to calculate groundwater recharge. The distinction is made by the definition of binary layers with different logical operations. It allows specific calculations to be applied in areas where a given condition is true using the ee.Image.where method.

The function we apply to each element of the meteorological dataset to calculate groundwater recharge is defined as follows.

The TM procedure can now be applied to the meteorological ee.ImageCollection:

Let’s have a look at the result around the location of interest:

The result can be displayed in the form of a barplot as follows:

The result shows the distribution of precipitation, potential evapotranspiration, and groundwater recharge along the year. It shows that in our area of interest, groundwater recharge generally occurs from October to March. Even though a significant amount of precipitation occurs from April to September, evapotranspiration largely dominates because of high temperatures and sun exposure during these months. The result is that no percolation into aquifers occurs during this period.

Now the annual average recharge over the period of interest can be calculated. To do that, we resample the DataFrame we’ve just created:

We now may want to get local information about groundwater recharge and/or map this variable on an area of interest.

Let’s define a function to get the local information based on the ee.ImageCollection we’ve just built:

We now use this function on a second point of interest located near the city of Montpellier (France). This city is located in the south of France, and precipitation and groundwater recharge are expected to be much lower than in the previous case.

To get a map of groundwater recharge around our region of interest, let’s create a mean composite ee.Image based on our resulting ee.ImageCollection.

And finally the map can be drawn. 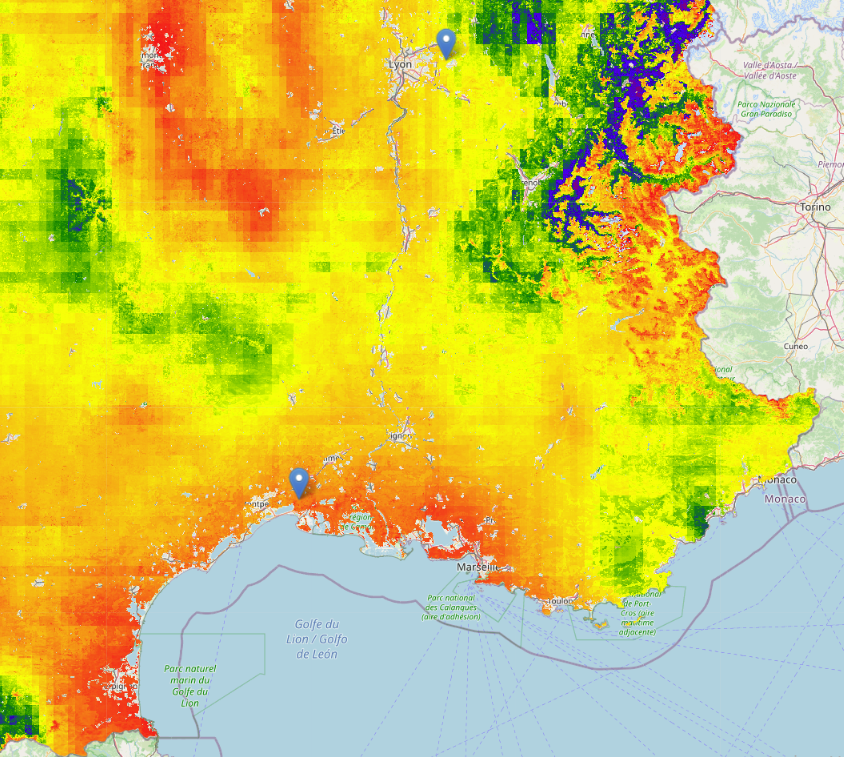 Thanks to Susanne Benz for precious advice. Thanks to Justin Braaten and Gino Miceli for their help in the final production of this Earth Engine community tutorial.

Play with the script…

This tutorial is available as a notebook and can be run on Goolge Colab.

Share this ArticleLike this article? Email it to a friend!
Email sent!